China's Movie Theater Business Is Booming: Is This Good or Bad News For Hollywood? 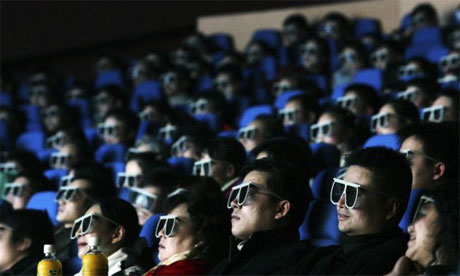 On December 7th, 2012, The Hollywood Reporter published a cautionary article by Clarence Tsui. While acknowledging the unprecedented surge in theater construction in mainland China (as many as nine new screens a day opening on the mainland this year) and the booming box office (up roughly 30% each of the last two years) and the increasing revenue flowing back to Hollywood from the limited number of Hollywood blockbusters that are distributed in China each year - Mr. Tsui sees potential problems down the road for American studios as the Chinese theatrical motion picture market continues to mature.

"With an average of nine new screens opening every day, China's film-exhibition business is riding a surge nearly unparalleled in history. And as predictions point to all the country's cinemas becoming digitalized by next year, it's shaping up as a gold mine for Hollywood producers to exploit. But is it really?"

Even though Hollywood-made blockbuster films have been dominating the mainland Chinese market and the quotas and percentages paid to foreign film producers have recently been increased (allowing even more US films access and the studios a bigger share of the box office), Clarence Tsui of The Hollywood Reporter quotes a prominent Chinese film exec, Zhang Zhao, to the effect "that Hollywood productions will soon have to confront the challenge of local productions released in fewer cinemas and shorter runs that cater to local tastes."

Making predictions about the Chinese film business is not for the faint-hearted. The movie business anywhere on the globe is notoriously unforeseeable: Add in the explosive growth in the Chinese theatrical business, coupled with the largely untapped potential of online marketing, in a region that has unique political (e.g., the State Administration of Radio, Film and Television or SARFT has powers that can upset the best-laid Hollywood marketing plans) and cultural determinates...

Perhaps Zhang Zhao is right: Hollywood should be cautious in China...

But the revenue potential may be too great for Hollywood to resist. For example, a Hollywood import, Life of Pi, is currently dominating the Chinese box office - crowding out Back to 1942, a Chinese-made epic that apparently had hopes of traveling outside China (Adrian Brody and Tim Robbins were given prominent, if secondary, roles in this sprawling historical film about a real-life famine and exodus). Life of Pi is doing so well in mainland China (so far 2/3 of the film's box office outside English speaking North America has been earned on Chinese screens) that Hollywood execs and Chinese film distributors must take notice. At this rate, Life of Pi will "outgross SARFT’s initial estimates by about $70 million, thus tipping the [2012 projected] market share balance in favor of imports."

Perhaps China will begin producing films that do well in non-Chinese theaters. And, perhaps, as Zhang Zhao seems to expect, internet marketing of theatrical films - niche films made in China for a Chinese audience - will come to disrupt the hold that Hollywood films currently have on the mainland box office. With approximately 500 million people online in China - and with lots of room for that number to grow - the internet will clearly play an increasingly important role in Chinese film distribution.

But how should Hollywood studios react to the challenges in China from local productions?

In the long run, there's probably little harm that can come from following the generic advice offered in the December 7th, 2012, The Hollywood Reporter: Yes, the U.S. studios should be aware of the competition. But how exactly should the studios guard "against becoming complacent about challenges from within [China]?"

Should Hollywood just start making lower budget niche films for the Chinese market? That sounds like a terrible idea.

Should the major studios be working harder at co-productions - partnering with mainland producers and thereby bypassing the quota system that limits the number of foreign films that can play in China - accepting the lack of control that comes with those kinds of deals? Perhaps. Mr. Tsui's article doesn't mention efforts that are already underway in that regard including the recent success of the modestly budgeted ($30M?) Looper that was a Sony film co-produced with DMG - a mainland production company that is currently co-producing Iron Man 3 with Marvel Studios (here's a link to the latest Iron Man 3 trailer). And there are a number of other major Hollywood-China co-productions that have been announced - like Stan Lee's big-budget Chinese superhero tentpole The Annihilator (with funding from National Film Capital, the Chinese state-run fund-management company) and a post-apocalyptic scifi film based on Bruce Lee's last script The Silent Flute (also drawing funding from National Film Capital and co-produced by Beijing-based Heshan Media).

What about using Taiwan and Hong Kong (Chinese speaking territories with established film production facilities - that can also get films into China without competing for one of the 34 quota slots for non-Chinese productions) as Hollywood outposts in East Asia? After all, the biggest Hollywood film currently in Chinese theaters - Life of Pi - was directed by Taiwan's gift to Hollywood, Ang Lee.

Or perhaps, for the time being, should the studios keep doing what they're doing - making big event movies (wherever it makes the most sense to make them) targeted at a global audience that seem to be satisfying the booming demand in China?

As of early December 2012, the top three movies in China for the year were Hollywood blockbuster big-budget imports that didn't have any special financial or cultural ties to China: The 3D reissue of Titanic which took over $150 million, followed by Mission: Impossible 4 with $109 million and The Avengers with $90.5 million. Add in the recently opened Life of Pi, which was directed by a Taiwanese director and features South Asian cast and locations, but is still clearly a big-budget product of Hollywood, and the dominance of Hollywood films in China in 2012 seems unrivaled.

Meanwhile, despite what Mr. Tsui's reporting suggests, Chinese-produced pictures have disappointed so far in 2012, garnering only 40% of total Chinese B.O. in the first three quarters.

The Hollywood studios will - of course - need to adapt as the world market for films evolves. But I'm not sure that worrying about niche films made in China for a rapidly growing Chinese market should be at the top of every studio exec's to-do list.

If the American indie film experience is any guide - the theatrical audience for niche films is generally small and devilishly tough to predict. Niche filmmakers in China may find (like their US indie brethren) that microbudgets and distribution on the internet are the future for niche market films.

Meanwhile, Hollywood and the Chinese audience have shown little interest in making or watching truly niche films in theaters.

And I'm not sure what Hollywood can do to respond to bigger budget Chinese productions - or the franchises that will emerge from Chinese producers.

Perhaps Hollywood simply needs to work on understanding the unique business, political and cultural challenges of making and distributing big-budget films in China.

Sure a big-budget Hollywood film with a Chinese superhero might appeal to a global audience - and I can see why Stan Lee (age 90) is going there. There's a chance such a film might become a sensation in Chinese-speaking territories and elsewhere. But even if The Annihilator hits big globally, will it make sense for Hollywood to ramp up production on untested properties just because a lead character is Chinese?

While I find the facts in Mr. Tsui's Dec. 7th, 2012 Hollywood Reporter piece intriguing, I don't know how the Hollywood studios are supposed to implement his information into filmmaking advice. At this point, Hollywood's theatrical revenue stream (inside or outside China) is based on big budget event films - and the idea that Hollywood can compete with or co-opt techniques from Chinese language niche films seems remote. And, although The Annihilator may prove me wrong, I think simply inserting a Chinese face into a Hollywood formula isn't going to change the course of cinema history.

Predictions are tough. But as 2012 comes to a close, the Chinese film industry is still looking to Hollywood and Hollywood-style production and heroes (whatever their ethnicity) for the secrets to creating the event films and franchises. Which isn't to diminish the role of original Chinese films or storytelling in the mix or the huge economic power that Chinese audiences are just beginning to wield. I just don't think it makes sense to expect Hollywood (on its own) to change course from the proven style of Hollywood mass market entertainment that plays well in theaters. While China may develop it's own franchises or buy a Hollywood studio, as long as there is a global audience for Hollywood event films, I anticipate that Hollywood execs will continue producing big-budget fare - primarily I suspect with Western stars. Chinese cinema will find its own voice - perhaps buying a Hollywood studio for its worldwide distribution apparatus - but I expect the big Hollywood studios will continue making Hollywood films.

In my view, the challenge for Hollywood producers is NOT in figuring out how to compete on their terms with home-grown Chinese movies - but in figuring out how to make money in China - where quotas and black-outs limit the access of non-Chinese films to an audience that is growing and will continue to represent part of a global market for what Hollywood does best - the big-budget Hollywood films.