Are We Reaching the Moment When Social Media (e.g., Recommedations From Users) Matter More to Indie Filmmakers Than a Review in The New York Times? 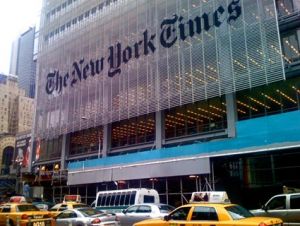 When it comes to the distribution of indie films, Brian Newman is nobody's fool.

So when the former CEO of the Tribeca Film Institute says (via a November 12th, 2012 blogpost): "This ain't working anymore," perhaps indie filmmakers need to listen.

What exactly is it that Brian Newman says "ain't working" for indie filmmakers?

Brian Newman says that all the effort to get a review for your film in The New York Times may not be worth it...

What prompted his essay?

Recently The New York Times has been awash in reviews for tiny films that have paid to play (often at great expense) in a New York theater. That's because, in a world where it is increasingly difficult for media properties to get noticed, indie filmmakers often scrimp, save, borrow and beg to essentially buy a theatrical run in the Big Apple.

Because a run in a NY movie theater has traditionally been the ticket to a review in the NY Times.

So a run in a New York theater and the attention of a review in The New York Times is a good idea, right?

As Brian Newman cogently argues, the pages of the Old Gray Lady have recently become so crowded with reviews for small films that we may have reached the tipping point. In today's digitally distracted world of superabundance, a NY Times review may have just become significantly less relevant than before: "When sorting the reviews in the Times starts to take longer than flicking through the alphabet on the cable box, people start to give up."

If The New York Times reviews are so numerous that no one is getting noticed, maybe your marketing time and money would be better spent on gaming the new tools - like social media and content marketing...

Here's how Brian Newman sees it:

"[S]mart filmmakers and their distributors need to face the facts, whether the Times forces their hand or not. In a world of superabundance, it becomes increasingly difficult to get reviewed, much less get seen (and both have always been hard). I always say that digital technology’s greatest impact lies in how it demolishes many canards that have held sway over the business. Perhaps the one saying that a NYT review is gold becomes less true when said reviews are less precious. Perhaps we need to envision a world, which perhaps already exists, where the NYT review isn’t even necessary. Look, I read the Times (in print) daily, I don’t think it isn’t valuable, but it has always only been one small piece of the puzzle I put together in my head when making a movie-going decision. We have lots of tools to influence this process and should focus more on those."
Posted by Randy Finch on Monday, November 12, 2012