On Technological Innovation and Disruption: Where Advances in Technology Come From 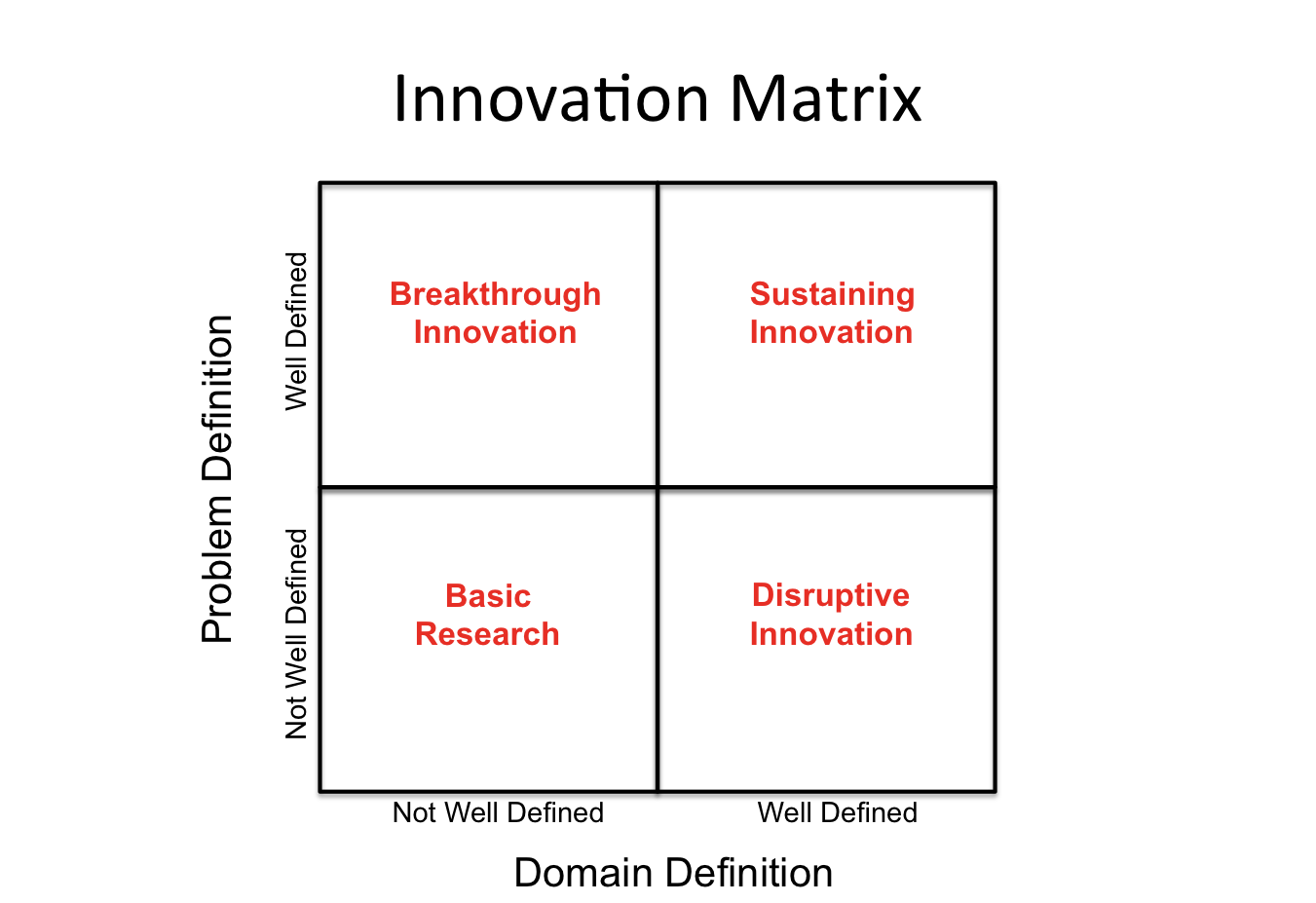 Innovation comes in many forms.

Digital consultant Greg Satell has developed the matrix (pictured above) to illustrate his taxonomy of the various kinds of innovation.

According to Greg Satell, basic research, the lower-left hand corner of the illustration, is primarily "the realm of academics." Research universities give smart people the freedom to set their own problems and collaborators.

Most companies are not willing to pay for "basic research." Instead, corporate research tends to be in the upper right quadrant of sustaining innovation - "where both the problem and the domain are well defined." According to Greg Satell, sustaining innovation does not create new markets but instead evolves existing ones.

The upper left quadrant is reserved for the kind of advances in a field - the revolutionary breakthroughs - where the technology leaps ahead. These so-called "breakthrough innovations" sometimes do not immediately find an economic use. An example of a breakthrough innovation might be the invention of the transistor. While a major innovation in the field, it took years for the transistor to lead to the integrated circuit and the disruptive uses of that technology (e.g., pocket calculators that disrupted slide rules and online music stores that disrupted recorded music).

Finally, we get to (for me) the most interesting quadrant, the lower right, disruptive innovation. The (still poorly understood) term, disruptive innovation, was coined in 1995 by Harvard Business School Professor Clayton M. Christensen in an article entitled Disruptive Technologies: Catching the Wave. According to Professor Christensen, it's a change in a business model - enabled by a novel technological solution - that creates a disruptive business impact.

Note: History shows us that a disruptive innovation may not be the consequence of an entirely new technology, but simply a new business approach that flows from a disruptive combination of existing ideas.

According to Professor Christensen, disruptive innovation is often a suite of existing technologies put together in a new way that offers a "different package of attributes valued only in emerging markets remote from, and unimportant to, the mainstream." This can lead to what Professor Christensen calls "new market disruption," which "occurs when a product fits a new or emerging market segment that is not being served by existing incumbents in the industry."

For example, Apple computers disrupted the market for main frames and mini-computers by packaging existing computer technology into personal computers - creating a whole new market for home computing. This disruption - a new market served by an innovative use of technology - is similar to how pocket calculators disrupted the old business model for how math was accomplished. Prior to calculators, the slide rule was commonly used as a calculation tool in science and engineering. But the pocket calculator created a new mass market for cheap portable calculating devices - a new market that was much bigger than just scientists and engineers. Starting in the mid 1970s (by 1976 cheap calculators cost just a few dollars to make) every student and household could afford an easy-to-use electronic device for performing math.

Another example of a disruptive innovation that used existing technologies to undermine an existing market leader is Wikipedia. By offering a free online community-edited text, Wikipedia disrupted the centuries-old market for encyclopedias. But notice, Wikipedia is used primarily by people who ordinarily wouldn't have bought a traditional encyclopedia. By selling into a "new or emerging market segment that is not being served by existing incumbents in the industry," Wikipedia eventually undermined the market for all printed encyclopedias.

Why does "disruptive innovation" matter?

Why should filmmakers care about how new technologies evolve and are applied in business?

Because filmmaking is currently undergoing a disruption that will forever change who makes and circulates motion pictures.

The latest digital tools for shooting (e.g., DSLR cameras and HD cellphones) and distributing (e.g., YouTube and Vimeo) films are not - strictly speaking - new. Instead, they represent a clever packaging of existing technology into new consumer-friendly applications.

If you look at the early inexpensive DSLR cameras that included video recording as an option - e.g., the D90 from Nikon in 2009 and the T2i from Canon in 2010 - it's clear that the manufacturers weren't focusing on the mass-market for filmmaking that these new tools would create. Whether the manufacturers intended it or not, the tools for making and distributing inexpensive but very high-quality motion pictures opened up a new market segment - a democratized microbudget filmmaking - that has redefined how journalism and entertainment are practiced. The incumbents in the industry - from established TV news outlets to the major motion picture studios - are finding that their businesses are being usurped by "amateurs." From Tahrir Square to the 2011 Sundance winner Like Crazy, the democratization of media is changing the practices of filmmaking in ways that the major film studios, broadcasters, and most established film educators have found challenging. But there's no going back.

We are in an era of unprecedented technological change for filmmaking. How these innovations are applied and combined into new business approaches will affect every filmmaker alive today.

Film has been disrupted.

One final question: Is the "suite of existing technologies" that teachers are beginning to use to reach out to students in some of the poorest regions of the world (e.g., using tablets like the Aakash to offer internet access for texts and video to India's dispossessed) about to disrupt education?