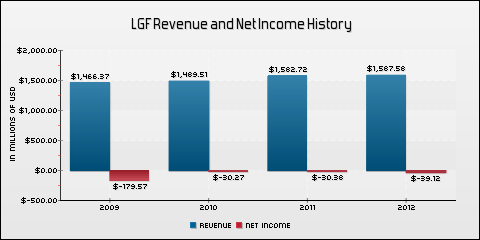 Lions Gate suffered this first quarter loss despite having one of the most popular films of the year in release at that time. The Hunger Games, which opened at the end of the first quarter (March 23, 2012) has gone on to gross over $680 million at the worldwide box office. But Lions Gate apparently spent more in movie marketing costs (e.g., for the build up to The Hunger Games and for launching the horror film The Cabin in the Woods and the comedy What to Expect When You’re Expecting) than it brought in during the quarter. On an “ultimate basis” Lions Gate predicted those 3 titles would be profitable (when the revenue from TV deals, home video, etc. comes in). But the first quarter numbers for 2012 caught analysts by surprise. Apparently the increasing cost of marketing the initial theatrical release of all films is making an already risky business that much riskier.

As reported in seekingalpha.com (the site responsible for the revenue and net income chart at the top of this post) Lions Gate has failed to meet analysts estimates (of profitability) in the last three quarters. But many analysts are still recommending that investors buy Lions Gate stock based on the potential of recently released titles - like the mega-hit The Hunger Games.

Thanks to Sheri Candler for the link.
Posted by Randy Finch on Friday, August 10, 2012