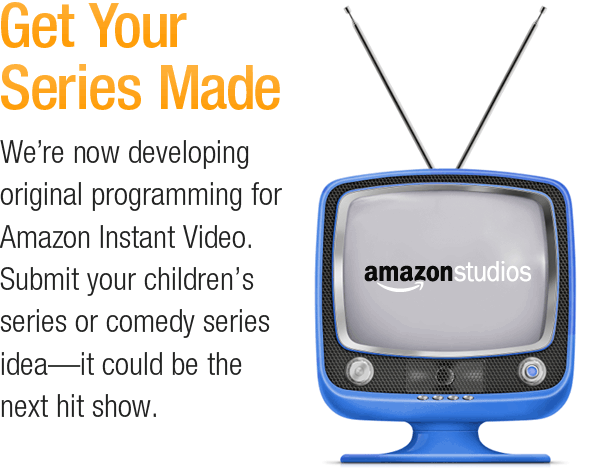 Now comes word (via a June 23rd, 2012 post to HollyWonk) that four new series scripts have been added to the Amazon Studios Development Slate: 3 comedy shows targeted at grown-ups and one children's show (notice, I've linked to the scripts that sparked Amazon's enthusiasm).

Doomsday - an end-of-the-world mockumentary that follows a conspiracy theorist, a devout Christian couple, and a patriot survivalist as they prepare for the end times

Buck Plaidsheep - a children's show about a well-intentioned sheep who repeatedly (and ineffectively?) tries to save the day

The creators of these potential series will reportedly each receive $10,000 in option payments and assistance from Amazon Studios, e.g., to build the story, create pilots and carry out audience tests. In return, Amazon Studios will have the exclusive right to move forward into full production. Apparently the ultimate goal for these four episodic shows is distribution through the company’s digital video streaming service, Amazon Instant Video - although the numbers suggest someone at Amazon may have another agenda (see my comments below).

How much is Amazon investing in all this development?

These numbers, if Matt Brian is right, are very interesting. They suggest that Amazon is paying numbers similar to prior deals for traditional TV product ($200,000 is in line with what the writer of a small to medium budget TV movie might make). What's especially interesting is that the revenue from Amazon's online video distribution system currently can't support those numbers. Until the revenue model has matured and is proven, no sensible executive would pay $200,000 to a writer based solely on Amazon's interest in online distribution of the resulting film. So Amazon must be counting on deals with Old World distribution partners (for foreign DVD sales, foreign TV rights, etc.).

Which begs the question, why would Amazon want get into business as a supplier of content to Old World distribution partners?

If Amazon wants to get attention and attract new subscribers, one way might be to offer Amazon-branded high-end work from established writers. In other words, if Amazon wants to market themselves as a quality alternative to HBO or network TV, a $200,000 payment to the writer of a feature film makes sense - as long as Old World theatrical and TV deals are out there for Amazon-branded content.

Still, if that is indeed Amazon's strategy (pay a lot to get high-end players to create Amazon-branded content that can be licensed to other distribution outlets - while building Amazon as a brand for original content), I can't believe that $55,000 is all the writer gets for creating a series. In my experience, a $200,000 payment to an established feature writer - someone like Clive Barker who is a name that could help with marketing a feature (and in making the execs at Amazon feel important) - makes sense. Clive Barker could make $200,000 (and more) writing Hollywood features. But, if Amazon wants to compete with Hollywood for experienced TV writers, I can only assume that $55,000 is what Amazon is offering per TV episode (and not, as Matt Brian suggests, for creating a series).

Whatever the numbers really are, simply looking at the projects and people, it's clear that Amazon is taking a very Old World approach to creating original content.

Ultimately, I am left pondering this fundamental question: Should Amazon be creating Old World content for Old World distributors and following the Hollywood model by paying name writers tens of thousands (or even hundreds of thousands) per assignment?

Why isn't Amazon focusing on new talent and product that is uniquely suited to their proprietary online platform (i.e., interactivity)?

Who's running Amazon Studios and who are they trying to impress?

I don't begrudge any established screenwriter their fee, but how much would it cost to develop an interactive online experience - exclusively available on Amazon Instant - that is produced by emerging artists and executive-produced by a big name (Clive Barker?)? Why are Amazon and Netflix so timid when it comes to their experiments with original scripted online entertainment? MTV and other outposts of Old World media companies have been much more adventurous than Amazon and Netflix in pioneering scripted interactive experiences (e.g., MTV's $5 Cover and The Hunt, are unique to the online environment - even though both also promote episodes that can be sold through traditional TV channels).

It's a peculiar moment in the history of TV: As some experts are predicting that the ad-supported revenue model for the Old World television business is coming to an end and the New World outlets are not yet mature enough to compete head-to-head for Old World talent.

How should old and new media companies navigate this disruptive time?

Instead of creating truly "original" content, Amazon and other New World companies that are creating content for Old World outlets (like Netflix) are apparently relying heavily on Old World talent and distribution outlets. Another irony is that by buying content from Amazon and Netflix (and building the brands of these upstarts), some Old World outlets are probably hastening the day when their own ad-supported TV business model collapses.

Having worked in Hollywood, I know that executives who are paid to acquire and package with stars are not about to change their ways... The long-standing joke in Hollywood is that such execs say "F@*k you, until I need you!": In that environment, buying a Clive Barker movie from a mortal enemy makes sense.

But I'll admit to being a bit perplexed by Amazon's choices when it comes to developing original content. While Amazon may see real money (maybe even millions if it hits?) in producing a Clive Barker feature or a half-hour animated remake of Tom & Jerry - my question is why is Amazon betting so heavily on Old World content production and distribution?

Making motion picture content like everyone else in Hollywood may bring some short term financial rewards, but, when the future of motion pictures is so clearly online and interactive, Amazon (and Netflix) investing in slightly-cheaper versions of existing Old World content seems sadly uninspired.

Thanks to Siobhan O'Flynn for scooping the link.
Posted by Randy Finch on Sunday, June 24, 2012