Building the Publishing Company of the Future 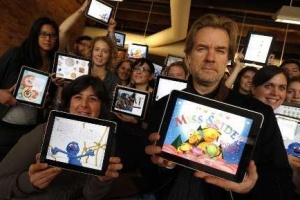 Old World "[p]ublishers are working so hard to defend an existing platform that they can’t devote the time, resources and creativity to pioneer in a new medium."

Since 2010, with $6 million in funding from venture capitalists Kleiner Perkins Caufield Byers, Nick Callaway has been growing (from 10 employees to 47, with 15 engineers) a publishing company for the 21st Century.

On March 13th, 2012 the Digital Book Works blog published Jeremy Greenfield's interview with Nick Callaway. It's a fascinating peek into the digital future of "books."

Thanks to Porter Anderson for the link.
Posted by Randy Finch on Wednesday, March 14, 2012