The Greatest Innovation For Spreading Good Ideas? Or is the Internet Simply Making Us "Docile Copiers?"

I am acutely aware that this blog is not that innovative. Yes I endeavor to share "new ideas" here - but there is precious little that I have done on this blog that is really mine - truly original or creative. Mostly I copy something someone else has said - and then I respond (see below).

In a Dec. 15th, 2011 blogpost, Professor Mark Pagel, a Fellow of the Royal Society and Head of the Evolution Laboratory at the University of Reading, addresses - from the perspective of an evolutionary biologist - how the Internet fits into the history of human creativity. I've copied a few of his ideas below (if you're interested, please read his entire post) and I'll offer my own response...

Professor Pagel observes that "whereas all of the other animals can pick up the odd behavior by having their attention called to something, only humans seem to be able to select, among a range of alternatives, the best one, and then to build on that alternative, and to adapt it, and to improve upon it."

In the history of evolution, this uniquely human "social learning" represented something new "because now ideas could arise, and they could jump from mind to mind, without genes having to change."

This human capacity has lead to what Prof. Pagel calls "idea evolution" - but Prof. Pagel writes that instantaneous and inexpensive mass communication has not made us more creative or active...

According to Prof. Pagel: "[A]s our societies get bigger, and rely more and more on the Internet, fewer and fewer of us have to be very good at these creative and imaginative processes. And so, humanity might be moving towards becoming more docile, more oriented towards following, copying others, prone to fads, prone to going down blind alleys, because part of our evolutionary history that we could have never anticipated was leading us towards making use of the small number of other innovations that people come up with, rather than having to produce them ourselves."

Perhaps. But his analysis assumes that bad ideas (blind alleys and fads) are as attractive as the (admittedly few) good ideas that are being circulated online.

And, to accept Prof. Pagel's prediction of a world of docile copiers, you must ignore a slew of recent events that were triggered - at least in part - by ideas that spread online.

Yes, most of us will have no more good ideas today than we had yesterday - but the spread of good ideas is happening more quickly than anyone ever imagined - and the effect of the Internet on the quality of human life has been unprecedented.

For example, the Internet-connected people of the Arab Spring may only be sharing a few (300 year old?) original ideas - but they are hardly "docile copiers."  You don't have to like all that is happening in the Arab world to appreciate how powerful the internet has become in spreading good ideas - as well as the bad. 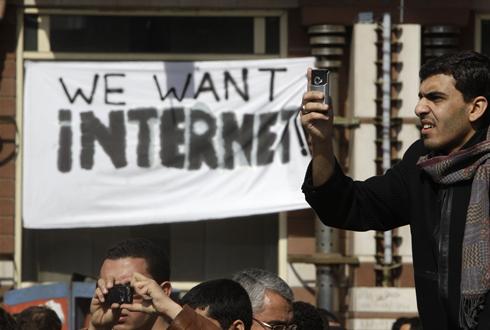 And can anyone argue that the effect of a few good ideas - unavailable in certain quarters until Facebook and Twitter - is changing the world forever?

Yes, Prof. Pagel is right: Most of what is online is not original and most users of the web are not that creative. But it's a mistake to undervalue how significant the Internet has been in changing lives: The ideals of the Enlightenment and the principles of non-violent civil disobedience and ruling by consent of the governed are reaching people who had no chance of learning and sharing and implementing those ideas before this century.

Perhaps Prof. Pagel, a scholar who came of age before the virtually cost-free environment of the networked world, isn't giving the Internet enough credit. Yes, the web has given new life to the observation by a 1950s science fiction writer that "90% of everything is crap." But that's not the point. It's all about how a few good ideas can spread online and be implemented by people who are activated by them.

The fact that most people are not churning out great ideas is unavoidable online. Until recently, most bad ideas never saw the light of day. But it's important to remember that in the tide of online sludge, a few good ideas (once denied to millions) are also carried along to spread in nano-seconds - where they can be acted on by non-docile copiers - all thanks to the rise of the networked world.
Posted by Randy Finch on Sunday, December 25, 2011