On Saturday July 23rd, 2011, Francis Ford Coppola made his first appearance at the San Diego Comic Con in 20 years to reveal his new project, Twixt, a horror/murder mystery that launches with a 30 city tour later this year.

Coincidentally, it was also 20 years ago that the legendary director of “The Godfather” and “Apocalypse Now” gave an interview where he famously anticipated the democratization of film - predicting a time when access to cheap filmmaking technology would (finally?) unleash the artform.

Having correctly predicted the rise of citizen filmmakers in 1991 (even if the great artistic achievements haven't shown up yet on YouTube, can anyone doubt that they soon will?), Francis Ford Coppola continues to explore how technology will unleash the artform. His latest project, Twixt, includes the experimental use of a new tool - an iPad app - that makes non-linear film storytelling possible.

Each screening of Mr. Coppola's new film, Twixt, will be a special event, because each audience will see a unique dynamic assembly of the film. Using his iPad app (pictured above in a photo by Jonathan Chang), Mr. Coppola will edit the film on the fly. As reported by Russ Fischer on SlashFilm.com, "depending upon where and when you see the presentation, you might see a totally different telling of the story than others."

Francis Ford Coppola isn't the only filmmaker who has been thinking about the non-linear storytelling potential made possible by new and cheap technologies. As the tools for presenting video online have rapidly become more sophisticated and easier to use, films that unfold differently each time they are viewed - with no set beginning or end - have become possible.

Mr. Coppola's iPad app can select clips at random, but he apparently plans on using the device like a film conductor - selecting the clips and the order in which he wants to play them at each "live" performance. That's one way of creating a unique version of a story from a library of connected short films.

But it's also possible for each and every member of the audience to construct their own story out of numerous related short films. For example, if a number of short film clips are arrayed on a webpage (like the clips on Mr. Coppola's iPad or as pictured below on my Plant City Stories website) each and every user could click on thumbnails - creating their own story (with no set beginning or end) simply by following their own interests. 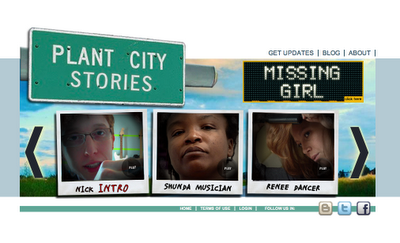 The image above is from my own experiment in non-linear filmmaking, a work-in-progress I'm calling Plant City Stories. Please visit the site and click on any of the 5 days (here's a link to Day 1) of the search for the "Missing Girl" that are currently available. Notice how video clips embedded into maps provide clues - and also watch as characters from the Plant City Stories homepage begin to weave into the "Missing Girl" narrative.

I'm not foolhardy enough to compare the quality of my Plant City Stories work with that of Francis Ford Coppola on Twixt. But I am delighted that one of my filmmaking heroes is pursuing a goal that I have been chasing too - experimenting with the new non-linear possibilities for filmed narrative.
Posted by Randy Finch on Sunday, July 24, 2011