Kind of Bloop: A Problem With Copyright Law

Web developer Andy Baio had a great idea for a music project, a tribute to jazz trumpet legend Miles Davis - using synthesized electronic music made from the sound chips of old computers and video game consoles (sometimes known as "chiptunes"). Andy did almost everything by the book: Licensing the right to cover the songs from Miles Davis's publisher. He even gave the profits (including all the money generated by his ground-breaking Kickstarter campaign) to the five electronic musicians that participated.

But there was one thing that Andy overlooked - or never thought would be a problem - that has ended up costing him a lot of money and heartache: The artwork for Andy's "Kind of Bloop" was a digitized transformation of the original photo of Miles from the 1959 album (the digital image Andy created is on the Youtube video above) - and the copyright holder of the original photo (see below) claimed copyright infringement. 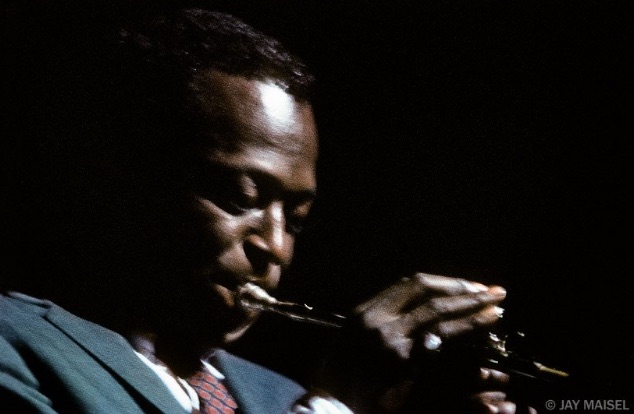 A June 23, 2011 article in Gizmodo by Matt Honan recounts how the eccentric photographer of that original iconic photo, Jay Maisel, used the copyright law to get a significant amount of money out of Andy Baio. Andy eventually settled (claiming he was in the right, but couldn't afford the legal fees to prove it) - paying Maisel $32,000. This payment, plus another $10,000+ in costs to Andy's own lawyers put the price tag at close to $50K. This even though a great many lawyers think Andy had done nothing wrong.

To be fair, there are legal experts on Mr. Maisel's side too. For example Terry Hart has argued that the outrage over this case amounts to "inexcusable... mobbing of a celebrated photographer." Hart's argument boils down to this: because "Baio used Maisel’s photo from the cover of a Miles Davis album for the same purpose as the original — copying cover art to use as cover art" the use is not entitled to the "fair use' exception under copyright law.

This case highlights a big problem with our copyright law: Rich content owners can assert that they have rights - and bleed poor artists to death in legal costs - even when the poor artist is operating within (or very close to) the established law. In other words, even though a "transformative use" of an existing work might fall within "fair use" - you'll need money to defend yourself against a determined adversary who lives in a 72 room house.

Just to be clear: I disagree with the analysis done by Terry Hart. Hart's argument (a new version that serves the "same purpose as the original" can't be fair use) leads to all sorts of unacceptable results. For example, almost every song parody - which by definition takes from an original work to comment on that work - serves the same purpose as the original (to entertain using music). Although he might wish it to be so, the "fair use" case law doesn't support the new rule that Mr. Hart proposes. Unfortunately the decisions about non-parody transformations are muddled. Which I think accounts for the cases Mr. Hart cites. But, if Mr. Baio had the resources to litigate, I think there's an argument to be made that his version of the Miles Davis photo qualified as parody - and therefore deserved protection under "fair use."
Posted by Randy Finch on Thursday, June 23, 2011