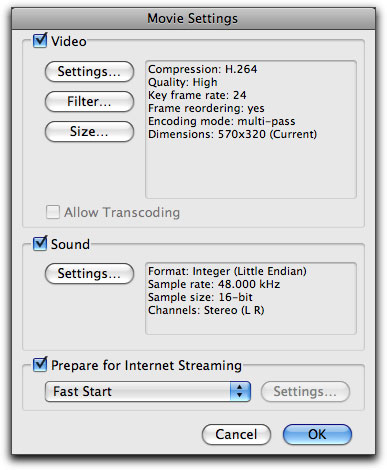 Battles are being waged right now, mostly out of the public eye, that will determine what sort of access filmmakers will have to the Internet - and who will control the billions of dollars of revenue from online video.

Most online filmmakers (those who've put their videos on Vimeo or YouTube) couldn't tell you what codec they've used - or even what a codec is (it's an abbreviation of "compressor/decompressor" - a codec is any technology for compressing and decompressing data). Even if you've tried to build your own site to play your film - you may only be vaguely aware of the different options for encoding video (H.264, m4v, Flash, OGG, WebM, Theora, etc.) and the problems different browsers have playing these different codecs.

There currently is no one standard for how videos should be encoded. That means there are many ways videos can be uploaded to the web, and each of these different options limits how that video will play on a particular computer or mobile device. Some popular codecs aren't even supported on certain devices (i.e., iPhone and iPad don't support Flash), which means some videos won't play at all on your shiny new phone or computer.

In January 2011 the behind-the-scenes battle to come up with one universal standard for all web video broke out into the open. It started rather quietly: In a short press release on Jan. 11th, 2011, Google announced that they would no longer support H.264 in their Chrome browser.

According to a Jan. 14th, 2011 analysis of Google's move that appeared in Mashable: "Google has come to the conclusion that there will never be agreement on H.264, since it is proprietary technology owned by MPEG LA, a firm that forms and licenses patent pools. [Apple and Microsoft are part of H.264′s patent pool, as are companies like Sony, Sharp, Cisco, LG Electronics, HP, Toshiba and Dolby. Absent from the list: Mozilla and Google.]"

As of today, the market for video online is fragmented (e.g., no Flash on iPhones). History tells us that one standard must eventually win (as with VHS and Betamax, eventually the market will coalesce to one universal standard, so that customers can receive their content in one universal format). Google doesn’t want the standard for video online to coalesce into video tag/H264 - which would require payments to rivals.

Some observers think Google's decision is all about the potential payments that Google might have to make for encoding using MPEG LA's patents. But Google (which is currently awash in cash) claims they can afford any payments they might have to make to MPEG LA. Google's press releases suggest a higher purpose: An open Internet - where indie filmmakers can upload videos confident they will play on all devices and there won't be expensive license fees for encoding. Google argues that H.264 (which is not an "open" technology) might discourage innovation - from startups unable to pay a license fee to MPEG LA - or from investors unwilling to support new online video companies because it isn't clear how much MPEG LA might charge for their encoding in the future. Here's an excerpt from a follow-up press release issued by Google on Jan. 14th, 2011: "“To use and distribute H.264, browser and OS vendors, hardware manufacturers, and publishers who charge for content must pay significant royalties — with no guarantee the fees won’t increase in the future. To companies like Google, the license fees may not be material, but to the next great video startup and those in emerging markets these fees stifle innovation."

Google's decision NOT to support H.264 in Chrome suggests that Google is gambling that they can use their position (the most-used browser by techies, plus the most-used smartphone OS in the world) to force everyone to move off of H264 and onto open codecs.

So Google is arguing that innovation requires an open codec that can become a universal standard - and they are choosing this moment to discourage a move toward H.264 (a codec that is not open) as the web's new universal standard. (To counter accusations of hypocrisy, Google explains their continued support of Flash - another codec that is not open - explaining that Flash runs on many systems already - but eventually Flash too must give way to an open codec.)

In Google's view, the future of online video should belong to an open codec like WebM. But Google's move means that - for the foreseeable future - filmmakers must encode their videos in multiple formats and use players that can decipher which browser and operating system requires which video codec...

Here are links to two recent opinion pieces, the first is critical of Google's move away from H.264 and the second is supportive.
Posted by Randy Finch on Saturday, January 15, 2011

what happens if a girl takes viagra said...
This comment has been removed by a blog administrator.
October 29, 2011 at 7:19 PM