Key Moments in the Early History of the Motion Picture Business

1826- The first permanent photograph (later accidentally destroyed) was an image produced by the French inventor Joseph Nicéphore Niépce. The image on the left is another surviving early Niépce photograph. The first photographic images made by Niépce involved placing a sheet of pewter coated with a sticky, tar-like form of petroleum - known as bitumen - inside a wooden box with a lens on one side. Once the metal plate was inside this camera, the lens was uncovered. Eight hours later (it took a long time for the light to change the chemical structure of the bitumen) the metal plate was removed in a darkroom and Niépce washed the plate in lavender oil to remove the unexposed bitumen. What remained - permanently fixed to the pewter plate - was an image of Niépce's backyard.

1830s- An invention known as the zoetrope (pictured above) became popular. The early zoetrope was essentially a small barrel with a strip of hand-painted pictures around its inner surface, which created the illusion of a moving image when the barrel was spun and the images were viewed through tiny slits in the barrel. 1870’s- French inventor Emile Reynaud modifies the zoetrope (using mirrors, an oil lamp and lenses) to enlarge and project "moving" images. Reynaud calls his invention the Projecting Praxinoscope (pictured on the left). The illusion Reynaud creates can be viewed by an audience - but it only lasts for a few seconds. Notice, the images Reynaud projects are still only drawings or paintings. No one has yet figured out how to project photographs - or more precisely how to take photographs in rapid succession - so that the illusion of motion (created when images flash in front of our eyes) can be married to photography. 1877- Eadweard Muybridge undertakes his now famous experiment to photograph a horse in motion. The images of the horse and rider were taken by separate cameras arrayed alongside a track with their shutters tripped one-after-the-other as the horse's hooves hit trip wires. Muybridge quickly realizes that he can paste the still images he has taken inside a zoetrope or a projecting Praxinoscope to create the illusion of motion.

1878- Thomas Edison, the greatest inventor of the day, patents the phonograph (that's an image from an 1878 Edison phonograph patent pictured above). While other inventors - like Frenchman Édouard-Léon Scott de Martinville - had produced devices that could record sounds (de Martinville had patented a device called the phonautograph in 1857 that collected sounds in a small horn attached to a diaphragm with a bristle that scratched an image onto a cylinder covered in lamp black, so that the patterns of the sound were recorded), Edison was the first to create a device that actually played back the recorded sounds.

1879- Edison patents the incandescent light. Notice that in 1878 and 1879, in a rapid burst of creativity, Thomas Edison has patented technology (for recording and playing sounds and for creating artificial light) that will become the basis of the modern motion picture business. Other inventors are at work on other key elements that will soon come together to make the modern motion picture business possible. For example: 1885- American inventor George Eastman patents a system for moving film on a paper roll inside a camera, replacing the glass and metal plates previously used (that's the actual patent for Eastman's 1885 film roller pictured on the left).

1889- West Orange, NJ. Edison’s employee, William Kennedy Laurie Dickson (pictured standing on the far left) demonstrates to Edison - upon Edison’s return from the Paris Exposition - a continuous loop of film (using George Eastman's long strip of film) running through a machine that Dickson has designed that will give the illusion of motion. Probably only a peep show inside a box, although Dickson claimed a form of projection was also demonstrated and not pursued. Edison begins to pursue the “kinetoscope” as initial venture into commercialization of motion picture technology.


1892- William Kennedy Laurie Dickson, working under Thomas Edison, perfects the kinetograph and the kinetoscope, the first to record a moving image, the second to view it. The kinetoscope (picture to the left, notice the eyepiece labelled "O" on top) was a wooden box that one person at a time could peer into, via a tiny window, to watch a motion picture, as a 50 foot long continuous loop of film passed over a bright light bulb, that flickered due to a rapidly spinning shutter. 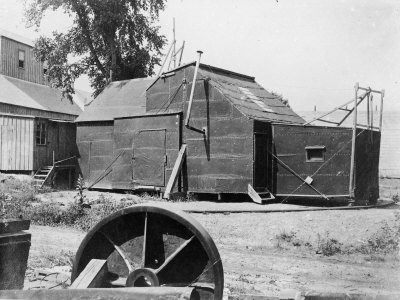 1893- Edison creates a studio on his laboratory grounds (nicknamed the Black Maria, pictured above), where the Edison Company shoots a number of motion shorts to be viewed in their new kinetoscopes.

1894- On April 14, 1894, a public kinetoscope parlor (Holland Brothers) opens in New York City at 1155 Broadway, on the corner of 27th Street, using the Edison Company's new invention. This is the first commercial motion picture house. There are ten kinetoscope machines in the Holland Brothers Kinetoscope Parlor - so the theater can handle only ten customers at a time watching Edison's short silent films. Watching a kinetoscope becomes a high-tech fad and other kinetoscope parlors quickly open up in New York and other major cities to handle the demand (I believe the photo of the kinetoscope parlor on the left was taken at the height of the fad in San Francisco in 1895). Edison is making a lot of money selling kinetoscope machines and the films they play and he sees no reason to pursue projected motion pictures. 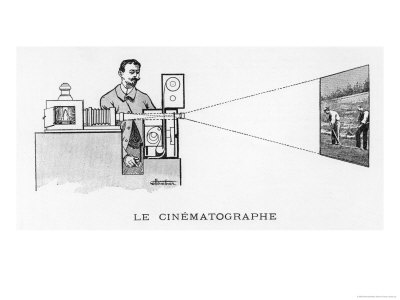 1895- The Lumière brothers create the cinematographe – a single device that is both a motion picture camera and (most importantly) a projector which weighs approximately 12 pounds. Using the cinematographe, the first public viewing of a projected motion picture image takes place in the basement of a Paris Cafe on December 28th, 1895. Though other inventors created similar devices very shortly thereafter, the Lumière brothers were also renowned for their work as filmmakers, gaining fame for their actuality films, which depicted real life and not a staged story.

1896- Georges Méliès, who attended the Lumieres brothers demonstration, begins making and projecting films for his Theatre Robert Houdin in Paris. Méliès quickly began producing staged magic tricks and using the cinematographe to create special effects. Also in early 1896, Thomas Edison becomes aware of the audience excitement over projected motion pictures - as business for his one-customer kinetoscope machines collapses. Edison quickly buys the rights to produce his own projector, which he calls the Vitascope. Edison premieres the Vitascope projector in a New York Music Hall in April 1896. Projected motion pictures become the latest thing.

1905- French competitors to Méliès, such as Léon Gaumont and Charles Pathé, have begun building permanent movie theaters in the suburbs. Méliès is hard-pressed to compete. Méliès tries to sell his films internationally, but illegal copies are a problem.

1908- Over 600 so-called nickelodeon theaters (empty storefronts that were cheaply and often unsafely converted into theaters) were operating in New York City alone. In addition to film purchased legally from Edison, Pathe, Gaumont and Méliès, nickelodeons also show illegal copies of these films (i.e., copies made without permission) as well as programming independently produced films. For a five cent admission fee, the customers would sit in a mismatched wooden chair to watch a program of short silent films - with perhaps one slightly longer "feature film" - all accompanied usually by a single over-worked piano player. 1908- Edison and other leading producers from ten major film companies (pictured on the left with Edison, who is wearing a cap in the front row 4th from the left) form the Motion Picture Patents Company (MPPC) which extended its control over of distribution, prices, and other factors so as to standardize the industry. Independent producers not associated with the MPPC often found their shoots disrupted by hired thugs, though their pictures remain the most popular with audiences.

1915- The MPPC, though highly ineffectual in stemming independent movie production, drew attention from the U.S. Government as a "trust." When companies get together to set prices or limit competition - whether they actually are organized into a single holding company known as "trust" or not - they violate a federal law known as the Sherman Antitrust Act of 1890 which outlaws "every contract, combination…or conspiracy in restraint of trade or commerce." The economic theory behind the antitrust laws in the United States is that the public is best served by free competition in trade and industry. Some businesses, like the MPPC, have tried to eliminate competition by fixing prices or by assigning exclusive territories to different competitors within an industry. Antitrust laws seek to eliminate such anti-competitive behavior and promote free and fair marketplace competition. After 1915 the MPPC lost its power. At the same time independent producers began banding into studios that would soon dominate American cinema.

1914-18- World War I. Prior to the Great War, the vast majority of films came from the cultural centers of Europe, primarily France, Germany, and Italy. As the continent was disrupted by warfare, filmmaking slowed, and American companies stepped in to fill the void, producing almost 75% of the world’s films by the 1920’s.
Posted by Randy Finch on Sunday, August 22, 2010